skip to main | skip to sidebar

The past few days Christmas music has been playing and it seems to bring great joy to Jean. Songs like "Rocking Around the Christmas Tree" and "Frosty the Snowman" have made Jean swing her feet, and gleefully smile. She knows Christmas time is near and has asked about ALL of her children by name in the last two weeks.
Sunday it snowed and she seemed mesmerised with the blanket of white outside.
Happy Holidays-
margaret
Posted by Anne Richardson at 2:04 PM 1 comment:

This Is Your Brain On Alzheimer's, Part 2

I recommend four short, superbly designed, videos titled A Quick Look at Alzheimer's: Four Pocket Films. Narrator David Hyde Pierce, filmmaker David Shenk, and illustrator Jossie Malis walk you through an introduction to the illness.
This wonderful series can be downloaded from/viewed at  www.aboutalz.org.
Posted by Anne Richardson at 11:42 AM No comments:

This Is Your Brain On Alzheimer's 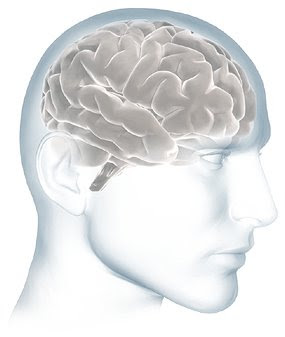 Here at the Fremont Street Center for Healthy Aging, we have concentrated so much on researching the care management of the illness that we have neglected public outreach. Luckily we are not the only people grappling with the impact of this degenerative disease. New resources on the web give lots of information about the actual mechanism within the brain which causes the loss of ability.
An interactive tour of the brain, illustrating the progression of Alzheimer's, can be found at
www.alz.org/brain/01.asp.
Posted by Anne Richardson at 11:30 AM No comments: 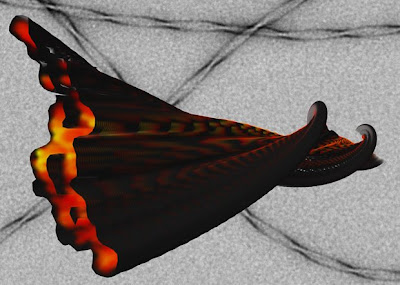 The August 2008 issue of Discover Magazine, a side project run by  Sarah R. of Fremont Street's sister institution, the Morningside Heights Health & Well Being Project, contained this photo of an A-beta peptide fibril. This is the peptide which, when found in the brain, provides positive proof of Alzheimers.
Posted by Anne Richardson at 11:13 AM No comments:

Mother's cognitive health is failing. By paying attention to her physical and psychological needs, and practicing full acceptance of her illness, we have been able to keep her daily life as routine and recognizable as possible even as she progresses through the downward spiral of Alzheimers. But we haven't been able to stem the tide of the illness itself.
All caregivers report that Mother is losing the ability to cooperate with them as they perform for her and with her the daily tasks of self care. Everything is harder for her to do. I have seen her have trouble figuring out how to climb into bed. Her illness has removed parts of her brain with a bulldozer.
From my perspective, she seems to be gravitating toward spending more and more time sleeping or inert. But there is a time period every day where she is alert and active. Between lunch and dinner, she moves around the house, moving things around and touching everything.
During this period she will agree to go for, and will sometimes initiate, walks around the block. She will start art projects, where she folds and rips paper. She will initiate conversations. Conversations with Mother are mostly guesswork on the part of her conversational partner, but she will occasionally make herself completely clear.
The other night as I was putting her to bed, she commented that her caregivers were not there. I explained that one of her caregivers would be back in the morning. She said "Where did you find them?", a perfectly logical question, and one I would have expected her to ask, before she lost so much intellectual ability to Alzheimers.
We have had a straight across trade, Mother and myself. I accepted that she needed help. In exchange, she accepted that she needed help. I supplied the caregivers. She accepted them.  We had to work together  & we did.
Mother's cooperation with the caregivers made it possible for Dennis and me to feel a sense of progress, even as her cognitive health declined. She was eating better, getting more exercise, interacting with people who cared about her well being all day long. By many of the most basic standards of health, she was doing well.
But as her brain shuts down, it is harder and harder for her to cooperate. This is the final outcome of the illness: total isolation. The body is OK, the social being is intact, but the brain is gone. You are still alive, but you can't help yourself.
In Mother's case, we are trying to forestall the final chapter of Alzheimers by providing her with enough support so that she is only fighting her illness, not fighting her illness and ostracism and social isolation and the resulting depression and anxiety and despair.
The learning curve for this approach was in the years I have spent accompanying my sisters who have schizophrenia, a similarly specific illness which targets the brain, but leaves the body and the social being intact. Like Alzheimers, schizophrenia has no cure. You learn to handle the illness. You can't eliminate it.
In the most understandable impulse on earth - the urge for self preservation -  people instinctively go for what is impossible: the elimination of schizophrenia, and the elimination of Alzheimers. Unable to eliminate the illnesses, we achieve this goal by eliminating from our lives people who suffer from these illnesses.
Community mental health puts ill people right in the middle of well people. It does this in the name of health. I know very well that most people do not regard their health as being improved by the presence in their daily lives of someone with an incurable illness which has targeted their brain. I have watched my sisters struggle against isolation, and now my mother.
But in the long run, the communities in which my sisters live, and the community (the block) on which Mother lives, experiences greater health from the presence of ill members. If I see the most vulnerable members of my community being cared for on a daily basis, I am better off than if I live in a community where I am told, and I clearly see, that all mentally ill people are viewed as undeserving of help. In community A, I know that if I became mentally ill I would be cared for. In community B, I know, with equal certainty, that if I became mentally ill, I would be consigned to care for myself, and my own diminished capacity would be the measure of my health care.
When we take mother for walks down the block now, we pass people who have known her for decades. Their faces register pain. The sight of Mother pains them.
Some can handle the pain, and greet her. Others retreat to the fantasy world of "the way I wish things were" and go by without showing any sign of recognition. Yes, it would be tidier if Mother disappeared from the block and was being cared for someplace no one ever saw her. And in the case of Alzheimers, it is reasonable to expect that this "other place" would be doing a good job. But the neighbors on the block who stop to say hello have conquered their fear of Mother's Alzheimers. They have used her illness to become healthier (more self aware, more self reliant, more reality based) themselves.
This is the unexpected bonus of community mental health. That the community - the well people - experiences increased health as a result of daily contact with people who live with incurable illness.
Posted by Anne Richardson at 6:19 AM No comments: 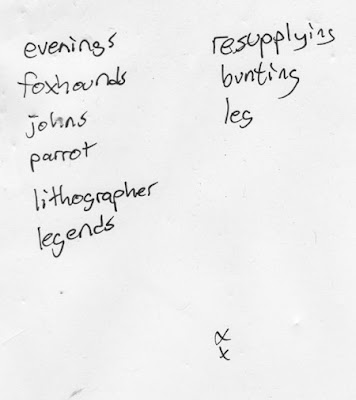 The above list is from blag/xkcd.com. Randall Munroe, the creator of xkcd, found this list among his things in his room, and while he can positively verify that it is in his handwriting, he has no idea what it means, or what impelled him to collect these words.
He gets lots of  helpful suggestions from his readers. I think this is an excellent use of the internet, almost as excellent as The Mother Project, in its incisive grasp of the way online communities can redress inequities of distribution of basic human resources, such as intelligence and memory.
Posted by Anne Richardson at 8:25 AM No comments:

Who Was That Masked Man